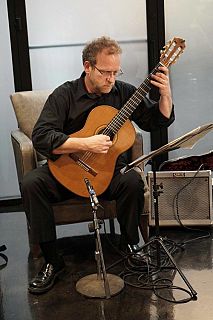 Cain Budds is a member artist at NCLAC who enriches the cultural atmosphere of North Louisiana by performing and teaching music on the classical guitar. With a doctoral degree in solo guitar performance, Cain Budds is a Professor of Guitar and Music Theory at Louisiana Tech and an adjunct professor at the University of Louisiana at Monroe. He travels often to perform at recitals in the United States and Mexico and in the first half of 2018 alone performed in five different Southern cities. With a lifelong focus on a singular musical instrument, Budds’ experience provides a unique perspective on the relationship between art, education, and community awareness.

Budds discovered his love for the guitar while he was pursuing a Bachelor’s degree in Graphic Design at Illinois State University. During that time, he confesses that he played the guitar more often than he created visual art. It was also in this phase of his life that he first heard the music of the classical guitarist Andres Segovia. Inspired by Segovia’s work, Budds chose to pursue formal academic training in the guitar in spite of the limited job opportunities in that field. Budds therefore considers it a significant milestone in his journey as a teacher and musician to now hold a position at two separate universities. As an academic, Budds takes an analytical approach to his artform. For him, the versatility of the guitar is well demonstrated in the classical genre, which, unlike pop and rock, tends to be more structurally complex. Readers who are familiar with music theory will note that classical guitar music tends to include key changes and counterpoint (more than one melody playing simultaneously). Another significant distinction is that a classical guitarist must know how to read music, as opposed to the simpler task of following a chord progression. With this technical knowledge at hand, Budds can quickly grasp the structure of a pop or rock song and learn to play it.

When it comes to his experience as a musician in our community, Budds jokes that Ruston enjoys “both kinds of music”: Country and Western. In seriousness, however, he admits that it is difficult to find an audience that appreciates his kind of work in any rural area. Even as a professor at Tech, a job he loves, he finds that his Music Appreciation classes often fulfill a required credit for a large number of students at a time, making it difficult to impart a genuine appreciation for music. Budds’s experience shows that there is definitely room in our community for more awareness of music as a versatile art form.

NCLAC is working to increase this awareness and provide programming that incorporates the musical and visual arts into community life. For example, Budds himself and other musical artists will be performing in Downtown Ruston during NCLAC’s Holiday Art Crawl November 15 and 16. In addition, Budds would like to encourage readers to note the variety of musical performances available through Louisiana Tech’s recitals and concerts. All are invited to get involved and take advantage of these opportunities to deepen our cultural knowledge as a community.
Posted: August 19th, 2019